Home Pirates of the Caribbean

Pirates of the Caribbean

Pirates of the Caribbean filmed in St. Vincent

May 16 2017 Breaking news: The pirates get pirated: digital hackers claim to have a copy of the new Pirates of the Caribbean and threaten to release it before the official date of May 26th. Rumor has it a ransom of 200 million was paid to avoid an early release.

2005: The sequel to Pirates of the Caribbean, subtitled Dead man’s Chest has been filmed in Saint Vincent and the Grenadines. The same set as Pirates 1 in Wallilabou was used.

March 2003: The filming of the movie Pirates of the Caribbean, “The Curse of the Black Pearl” starring Johnny Depp, Orlando Bloom and Geoffrey Rush has given a major economic boost to the islands of St. Vincent and the Grenadines.
Released in July 2003, this is the story of rascal hero Captain Jack Sparrow (Johnny Depp), assisted by Will Turner (Orlando Bloom) joining forces to pursue the cursed pirates. More about this on the official movie site.

The pre production stage, transforming Wallilabou Bay, St. Vincent, into the 17th century town “Port Royal” and the subsequent filming on set have provided many jobs for our islands. Most of the hotel rooms on the island were needed, many taxi drivers and boat operators were employed, as well as extras selected from the local population and visiting yachtsmen.
Some of the crews of yachts listed on our website were there, below are some pictures of them, (click to enlarge) the set and the stars, and here are some more pictures. 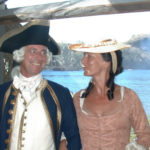