St. Vincent is locally called “the mainland”. A mountainous island covered in tropical greenery. There are no white sand beaches (which you will find further south in the Grenadines) but this makes the island unique as it is totally unspoiled by the more commercial style tourism. Even so, the you’ll find some very interesting places on St. Vincent, especially if you like hiking.

The Arawak name for St. Vincent was “Hairoun”, meaning island of the blessed. Today that name still exists in the national beer of St. Vincent and the Grenadines. 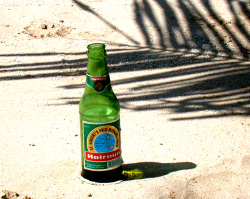 For a long time the island was inhabited by Arawak and Carib Indians until finally the latter, after fierce struggles, were defeated by the English in the late 18th century. Most of them were killed or deported to Mosquito Coast. After that the island has been alternately in the hands of the French and English who established plantations which used slave labor (abolished around 1840). It is now an independent country within the British Commonwealth.

Dominating the island is the Soufriere volcano (3000feet high) which will make a great hike of about three hours for the willing and able.

A taxi will take you along the windward coast until you reach Georgetown in the north. Then you’ll walk a trail that leads through plantations, rainforest and finally to the mountaintop where you’re above the tree line and on a clear day will be able to look straight down into a 900 ft crater!

Visit the Botanical Gardens, the oldest in the Western Hemisphere where you’ll find a direct descendant of the breadfruit tree Captain Bligh brought to the Caribbean and many more tropical plants. Knowledgeable guides will be able to explain everything about them.
Or the Montreal gardens, possibly the most beautiful in the Eastern Caribbean.

Let your Yacht take you along the leeward coast to explore some deserted anchorages. There is good snorkeling in most of them. Ashore there are  black sand beaches and nice walks into the rainforest. A nice daytrip from Bequia is to Petit Byahaut or Wallilabou, the set of Pirates of the Caribbean “the curse of the Black Pearl”.

Still want a white beach on St. Vincent? Young Island is a tiny island just 100 yards off the southern coast. This is the location of one of the most exclusive hotels in St. Vincent and the Grenadines: Young Island Resort.

Waterfalls: Take a speedboat to the Falls of Baleine in the north of St. Vincent or walk one of the many nature trails inland to one of the waterfalls there.