Canouan is Carib for “island of turtles”.
It was until not so long ago one of the less developed islands of the Grenadines. Until the late 18th century various Indian tribes  inhabited the island until the British finally succeeded in defeating the last of these, the Caribs.

After that  the Snagg family established a sugar and cotton plantation; they also founded a small boat building/whaling station.
When a hurricane devastated most of the plantation in 1921 and Henry Snagg died in 1924 the population of 700 was left to fend for itself by farming, fishing and some worked in the then only hotel, Canouan Beach Hotel. 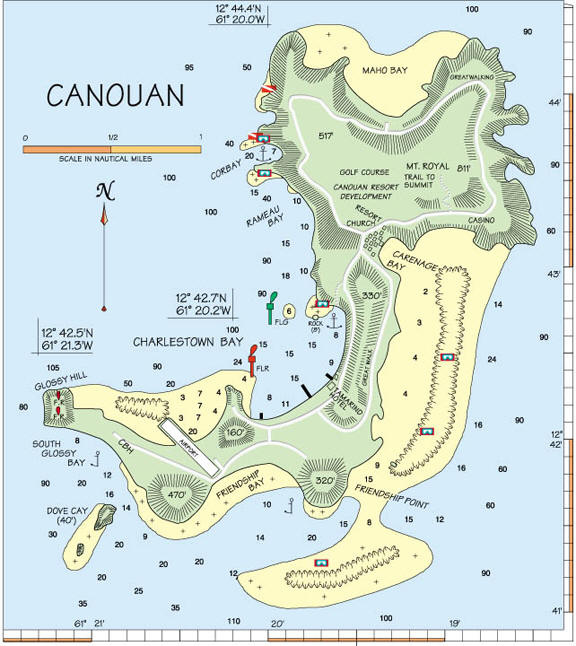 Now the island is starkly divided in three parts:

The entire north of the island has been sold to a development company which has done much to improve at least the infrastructure of Canouan. The airport has been enlarged permitting easy access to the island by private jet.
They built a luxury resort on the East side of the island. Various companies have managed the resort. Currently it is a Mandarin hotel. For hotel guests only.

The Southwest is currently a Sandy Lane resort and marina.

The middle: Yachts DO still have permission to anchor in the bays on the west coast. Really good snorkeling is in Rameau Bay. You can also anchor or take a mooring off the Tamarind Hotel in Charlestown. The “locals” live here and they welcome visitors from yachts.