Imagination is a 46 ft Fountaine Pajot Bahia Catamaran. She is fast, stable and comfortable. Imagination is one of the few yachts offering live aboard scuba diving in the Grenadines. 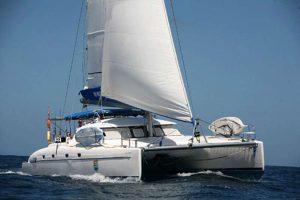 The current owners/crew bought her after she was used as a charter catamaran for 8 persons without skipper.
Their plan was/is to first charter in the Grenadines and eventually sail Imagination  around the world in 2021. Therefore they did major cosmetic, electronic and safety equipment upgrades and renovations.
However, in the near future she is here as your private floating hotel  to show you the Grenadines!

Imagination accommodates 6 guests in 3 cabins, each with private bathroom. Crew has separate quarters. She is a great family yacht, she has many water sports toys! 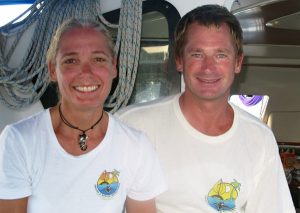 Shawn and Ally have known each other since they were 10. They each got married, divorced, had careers but kept bumping into each other occasionally, both in real life and on Facebook and Skype.
Eventually, their relationship became permanent and now they have sailed more than 20000 miles on Imagination in the Caribbean!
Shawn is a scuba diving instructor, scuba diving can be included in the charter.

Many more details and specifications:

Rates start at $300 per person per day! Please contact us for availability and detailed rates.