Petit Saint Vincent is the southernmost island of Saint Vincent and the  Grenadines. It has beautiful beaches and a calm anchorage. Do beware of the currents, they are extremely strong, yachts often turn sideways to the wind. Therefore, it is better to take a swim from the beach.
PSV is a private resort, ashore only the beach and the two bar restaurants are open to the public. If they are not fully booked it is sometimes possible to arrange an island tour, ask at the reception.
In case you like a night ashore, rates start at $1260/night. Drinks at the bars are priced accordingly. 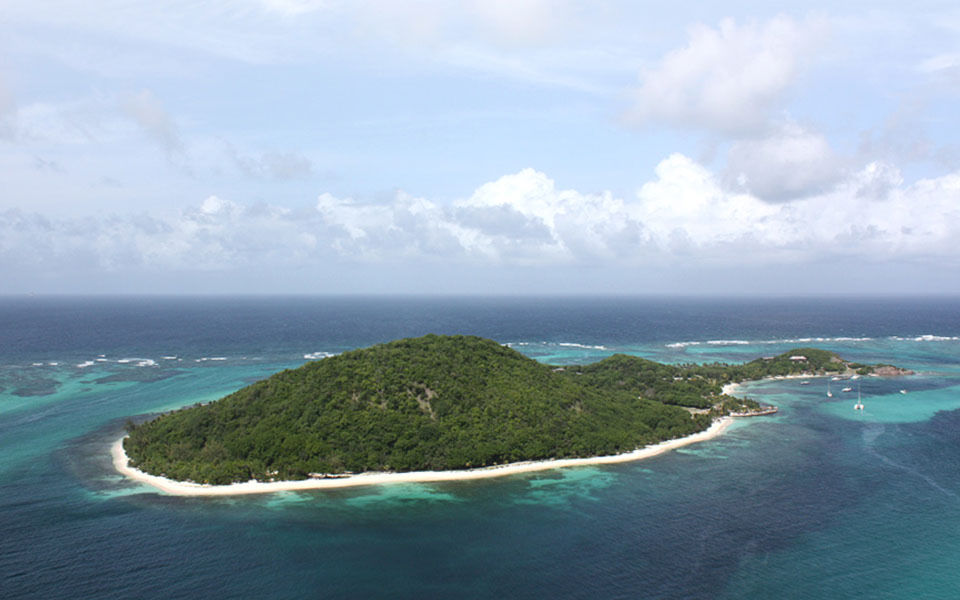 PSV is not owned by a resort chain. It is the personal creation of Haze Richardson, who lived on the island with his wife Lynn and their seven yellow labs.
In 1962 Haze finished his tour with the air force and with a flying buddy, Doug Terman, bought a yacht and sailed off into the horizon with no timetable or final destination. They sailed from New York to Bermuda and then headed south to the islands. En route, they met an agent who agreed to sell charters on their boat.

Their first customer was a Mr. H.W. Nichols and family of Cincinnati, to be picked up in Grenada and cruise to Martinique. During the three week cruise Mr. Nichols expressed a desire to purchase an island.

The following year Haze and Doug sailed the Grenadine chain in search of that island. They anchored at the then uninhabited Petit St.Vincent and learned from the people on neighboring islands that it was owned by a lady living high up on the hill on nearby Petit Martinique. It was rumored however, that she would never part with her island. Finally allowing them into her home to talk, she liked them and eventually agreed to sell.

Arrangements were made between Mr. Nichols, Doug and Haze to purchase the island and build a small hotel. And so it was that in May 1966 they returned to PSV and began to clear the necessary land.

Life in those days, even in the Grenadines, was not easy. There was no water, electricity, food or communication. They had only the marine radio on Jacinta, where they lived for the next seven months. Their commute however, was only the short ride to the beach and their meals were caught to order (literally!) by the cook who dived off Jacinta for lobster, fish or conch, with only a few minutes notice.

Haze and Doug?s mission was to build the hotel and find a manager for it. But before completion in December 1968, Mr. Nichols asked Haze to stay on as a “temporary” manager. He did and became the owner and manager of his own vision of paradise

In January 2007, Robin Paterson was sailing through the Grenadines on his yacht ZANZIBAR when he first spotted Petit St. Vincent, and fell in love with the island. By coincidence, two years later Robin’s friend Philip Stephenson sailed past the island on his yacht GALILEO and also became infatuated with its charm and beauty.

Phil and Robin resolved to purchase this spectacular island in 2010 and to further invest in it to continue the legacy and integrity of PSV while adding to it with their own vision. Some of the new additions are renovated cottages, a new beach bar and restaurant, and hillside spa.

Already described in many “Top 10” lists as the perfect hideaway, the two friends have continued to keep the island in the ranks of an “ideal escape for successful people who are secure enough to leave things behind for a while” and for those who enjoy the independent nature of life that only Petit St. Vincent can offer.